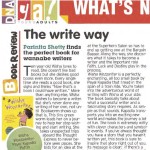 Ten-year-old Wisha loves to read. She doesn’t like bad books but she dislikes good books even more.Every single time she reads a good book,she sighs and thinks “Now that’s a book I could have written.” More than anything else, Wisha wishes to become a writer.

But she’s never done any writing of her own, not until Bookworm shows up that is. This tiny green worm leads her on a journey to help her stop wishing and start writing. She takes unexpected trips abroad the Thought Express to never before seen places.She bids for an idea at the auction in the marketplace of ideas. She can’t afford a hero at the Superhero Salon so has to end up getting one at the Bargain bazaar.Along the way,she discovers what it takes to become a writer and the important role Faith, Luck and Destiny play in the process.

Wisha Wozzawriter is a perfectly enchanting,all too small book by Payal Kapadia that I read in the span of a train ride.You’re taken into the adventurous world of writing with Wisha at your side. The book basically talks about what  successful writer and a fascinating story requires.As simple as that sounds,Kapadia Transports you into an exciting new world and makes the journey a lot of fun. The book is extremely witty with clever characters and symbolic events. If you’ve always thought you have a story that you haven’t written yet ,this book is sure to inspire that story right out of you.Its message is clear: if there’s a book that you want to read, but it hasn’t been written yet,then you must write it.

In Payal Kapadia’s “Wisha Wozzariter”, a 10-year-old decides to pen a book. What follows is an entertaining quest for ideas and characters ‘I wish I was a writer,’ sighed Wisha. ‘Well, you are Wisha Wozzariter,’ said the Bookworm. ‘So I